In May 2007, to mark the 30th anniversary of the release of Star Wars: A New Hope, USPS released a commemorative set of 15 first-class 41¢ postage stamps.  The stamps, featuring artwork by Drew Struzan, were revealed at Star Wars Celebration IV in Los Angeles, along with a series of first day covers that included an insert detailing the stamp unveiling event. We were fortunate enough to be there in person, and were able to photograph other aspects of the promotion, which included a great display stand with artwork of the stamp sheet, a gigantic banner version of the fan-voted favourite Yoda stamp, a fantastically accurate life-sized landspeeder, and display versions of the R2-D2 mailboxes that USPS had installed around the country at the time. 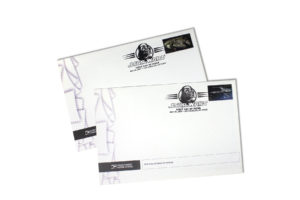 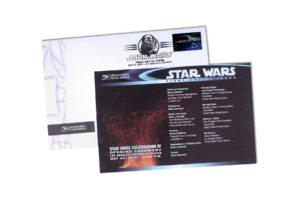