This is my original Kenner large-sized 15″ Darth Vader action figure that I purchased in 1980. Despite his mere five points of articulation and generic flashlight-style saber hilt, I always thought this was a great sculpt for a toy of that era. His shoulders sit secured by a rubber band in actual sockets, making for very tidy joints, and his helmet dome is cast separately from his faceplate which allows for sharp sculpted features. I don’t know at what point 10-year-old me took scissors to the box he came in, but at least I still have most of the Dark Lord’s original packaging in a flattened form too. 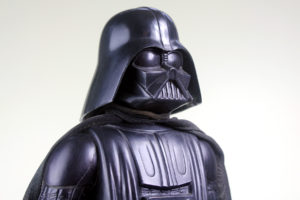 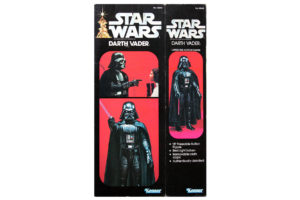